How To Get Better At Improv: Tips And Tricks

Home » Blog » Tips and Guide » How To Get Better At Improv: Tips And Tricks

Part of what’s exciting about acting is that you never know who you’ll be portraying, where the scene will be set, or what the characters will be up to. That variety of circumstances requires the performer to have a variety of acting tools available to help connect with a role no matter what. Improvisation is one of those tools that can help in any scene—dramatic or comedic. Below, we’ll take a look at some handy tips on how to get better at improv.

Improvisation, or “improv” for short, refers to comedic sketches that are made up completely in the moment. There is no scripted scene to study or rehearsals to help you prepare. Performers typically work off of random suggestions provided by the audience and build a scene off of those suggestions. The television series “Whose Line is it Anyway?” is a great example of short-form improv.

Though most people think of “improv” as short, there’s also long-form improv, where a whole story is developed out of thin air by stringing several humorous scenes together. Long-form improv relies on the authentic relationship of the characters and their interactions for its humor to develop truthfully.

WHAT DOES IMPROV HELP?

Casting notices will often require improv experience or training. This tells the casting director that you are a well-rounded performer with the ability to work with anything that is thrown at you. You come into the audition room with a specific take on the character, but the director asks for something different—can you adapt and approach the character from new angles quickly?

Improv can help not only your acting skills, but also your general life skills.  Improv teaches performers to stay in the moment, connect with their scene partners, and be open-minded. It keeps you on your toes, encourages you to use your imagination to problem-solve, and gives you the confidence that you can handle whatever is thrown at you: all skills that can be applied to real-life situations.

It also teaches you that it’s ok to try and to fail, that you can get back up on your feet and do better the next time; sometimes that’s exactly how to get better at improv.

HOW TO GET BETTER AT IMPROV

There are hundreds of theater games designed to help improve actors’ improv skills, not to mention dozens of tips for making an improv scene work. Here are the main concepts to know that will teach you how to get better at improv.

Agree to what your scene partners say or do. The phrase, “Yes, and” is the guiding principle here. Not only are you obligated to agree—say “yes”—to the other actor’s premise, you must add to it: the “and” part of the bargain.

Denying what a scene partner has declared shuts down a scene quicker than anything. It doesn’t matter if you don’t like what they’ve said, if your scene partner is behaving badly, or if it doesn’t match where you thought you were going with the scene. Just go with the flow.

Consider “if/then” premises: if what that other person said is true (and it is), then what else is true? Add that answer to the scene. 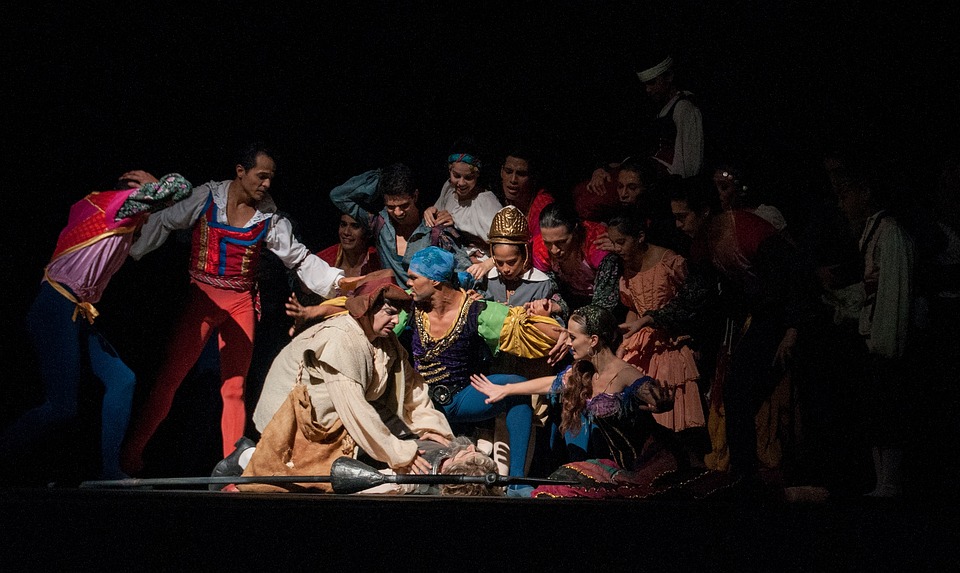 The status quo is pretty boring. To keep a scene moving and the audience engaged, heighten the situation you find yourself in.

You can do this by adding to the problem of the scene rather than solving it; if you solve the problem at hand, the scene is over. If you add more obstacles to achieving the goal of the scene, that’s where the humor can be found, not to mention it makes the scene more interesting.

BE IN THE MOMENT

The key to performing well with another actor is to truly focus on them and really listen to what they are saying in that moment. Use eye contact to connect with your scene partner. Learning how to get better at improv requires approaching it as teamwork; it works best when all actors in a scene are working together—you’re teammates, not adversaries. 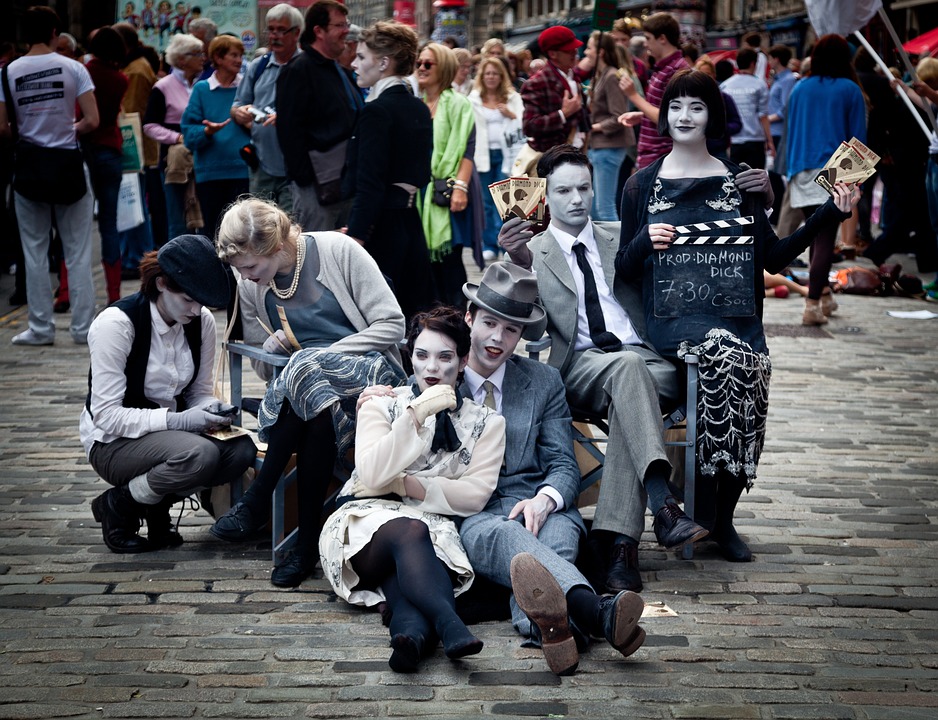 To make an improv scene come alive, make very specific choices along the way about the character(s), their relationships, the setting, and their goals in the scene.

Enter and exit with purpose. Decide where you’re going and why. Walking onstage and doing nothing, staying silent due to nerves, or walking offstage for no reason are all confusing to both your fellow actors and the audience.

Don’t worry that your choice might not be “the right one.” There’s no such thing. You can work with whatever’s in front you to further the scene, be it your own choice or your scene partner’s. The essence is of making specific choices to carry things forward, not stick with a steady plan.

Choose an activity for your character; one that you can perform with the other character is ideal. Shared activities are more interesting than solitary ones. It’s more fun to watch 2 people playing ping pong than it is to watch one person crocheting. Providing details about the activity will further enhance the scene, whether you or your scene partner add them.

Decide what your character’s emotional state is, too. Remember that it’s better to choose an upbeat emotion as anger or frustration can make the scene less interesting, frustrating, or uncomfortable for the audience.

Add details of a history that you and the other character(s) share. This is another “yes, and” trick. Add specifics to something your scene partner says to make it clear that you were both there and that it was memorable. Avoid future scenarios; since they’re hypothetical, there’s really nothing interesting to play off of. A common history is replete with anecdotes and foibles to interest the actors and the audience.

Take classes, show up for them, and volunteer to get up on stage! Don’t shy away from trying something that’s new and maybe a little bit scary. That’s part of the fun of improv: you don’t know where you’re headed, but you’re willing to take the risk. Take notes, too, and refer to them when preparing for an audition or getting ready to do more improv.

Getting familiar with what your voice is capable of—like changing the tone, pitch or volume—adds options to your acting choices and can have a powerful effect on a scene. Learning to sing is not only a skill, but a joy, once you get over any fears you may have about whether you’re good enough.

Singing will inevitably come into play in an improv scene at some point; being comfortable with your voice lends authenticity to the way you use it in a scene. There truly are no bad singers, just as there is no right or wrong way to play a scene; differences can be novel, interesting, even exciting.

Vocal lessons aren’t only for knowing how to get better at improv; they can enrich your life in other areas and ensure your voice will stay healthy and resonate for years to come.

Any form of dance, martial art, or yoga will get you familiar with what your body is capable of. Specific movements can be a big part of a character’s makeup, from the way they walk, sit, stand, and gesture to the speed with which they move. Anyone can read a line, but can they imbue it with authenticity? Can they create a character distinct from their last?

Movement adds yet another tool to your acting arsenal; it’s non-verbal communication that can speak as loudly as actual words.

Observe characters, relationships, other actors’ performances and even yourself or others in real life. The idea is not to judge, but to identify the skills you’ve learned when you see them in action and recognize the choices a writer, director or actor has made and the effect they have on a scene.

Go see plays or improv groups in live theater settings, watch movies and television shows, read books. These all have characters, actions, and scenes that you can evaluate to figure out how to get better at improv. Watch yourself on video, too. If you get notes in class, be able to listen to them objectively so you can keep improving.

STAY IN THE KNOW

Staying up to date on current events and knowing historical facts can prepare you for anything in improv. Your scene partner or an audience member may throw something at you that touches on the real world. If you have no clue what they’re referring to, you can get lost. Be ready to play with anything someone else introduces into the scene. Current and historical events often have a good deal of comedy gold in them, ready to be mined.

Practice what you’ve learned, a lot—anywhere and everywhere. You can try out your new skills in the real world just like you can in your living room. Teaching, sales, and theme park jobs are ideal for employing these new tactics. Then, tell someone else what you’ve learned, or even teach them your new tricks; teaching a topic is one of the best ways to learn it.

Getting better at improv involves observation, trust, action, and creativity. You don’t need to focus on being funny or going for the laughs. Use your imagination, approach the situation as if it is 100% true, and listen to your scene partner. The laughs will come from your earnest efforts. That’s how to get better at improv.